The head of trading app Robinhood and Wall Street hedge fund managers fielded a barrage of questions in the United States Congress about their role in the GameStop trading frenzy, at times being cut off by irate policymakers who found their answers wanting.

Financial heavyweights including billionaire Republican mega-donor and Citadel CEO Ken Griffin defended their businesses at the virtual hearing, which lasted more than five hours. The officials probed how users of social media site Reddit, trading on retail platforms, squeezed hedge funds that had bet against shares of the loss-making video game retailer and other companies.

“Robinhood owns what happened and we need to make sure it doesn’t happen again,” said Robinhood CEO Vlad  Tenev, who appeared to answer the most questions.

The inquiry aims to shed light on the hazy sequence of events that precipitated the ascent and rapid decline of the struggling video-game retailer’s share price, when it rocketed from $17.25 on January 1 to $347.51 on January 27. They since plunged back to about $50 and on Thursday, they sank a further 11 percent to $40.69 after the hearing. 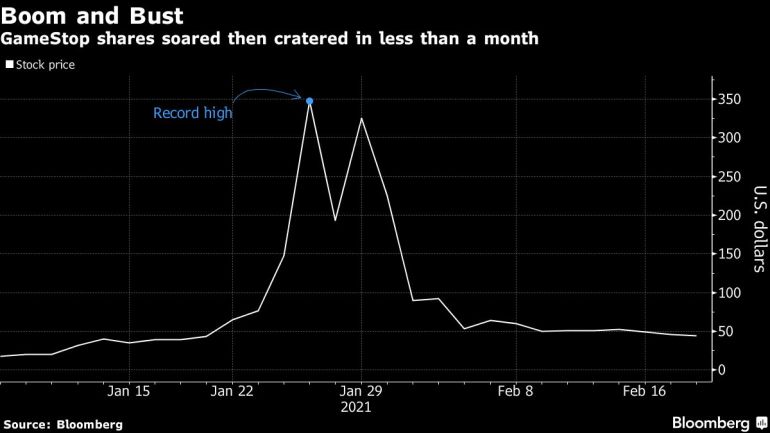 [Bloomberg]
Robinhood and other trading apps drew fire for putting trading limits on GameStop a day after the stock price more than doubled. The trading platforms, which face numerous lawsuits, said the limits were needed because the wild swings in share prices prompted clearing houses that guarantee trades to call for billions of dollars in extra collateral.

But outraged policymakers questioned if the platforms were siding with large hedge funds over retail investors.

Representative Sean Casten, an Illinois Democrat, played an automated message on the Robinhood customer service phone line while questioning Tenev about how customers are treated.

Also at the hearing was Keith Gill, a Reddit user and YouTube streamer known as Roaring Kitty. He sat in a red video-gaming chair from which he has recorded many videos promoting his investment in GameStop. Displayed behind him was a poster of a kitten with the caption “Hang in there!” Many investors who bought GameStop as the price skyrocketed now face deep losses. 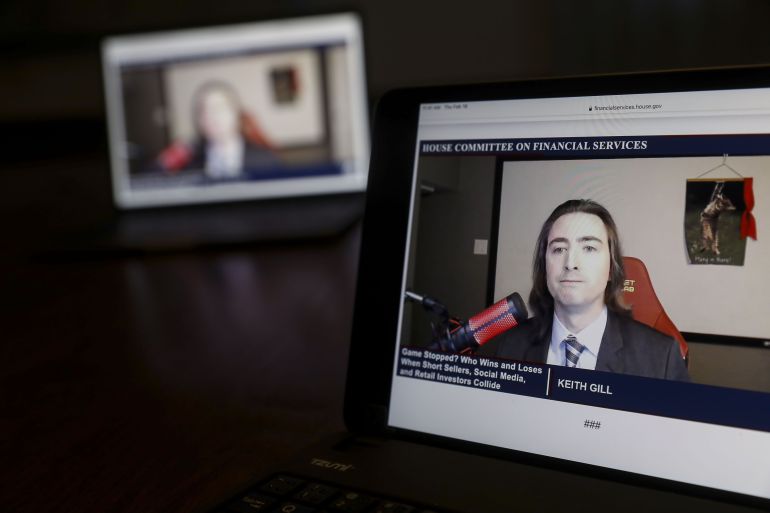 “I am just an individual whose investment in GameStop and posts on social media were based upon my own research and analysis,” he said.

Representative Maxine Waters, chair of the Democratic-led House finance panel, is a critic of Wall Street, while Republicans on the panel also sought to burnish their consumer-protection credentials, making for a fiery virtual hearing featuring echoes, feedback and background noise.

Waters, who in January called hedge funds “unethical,” frequently talked over Tenev and Griffin and cut them off. At the end, she promised to hold more hearings, with testimony from regulators at the Securities and Exchange Commission and the Financial Industry Regulatory Authority.

She said she was “more concerned than ever” that retail investors were being taken advantage of and that large market makers like Citadel – which ensure there is sufficient supply of a particular asset to meet demand – could pose a threat to the financial system.

In prepared opening testimony, the witnesses generally acknowledged the GameStop saga was unprecedented, but they all said there was no foul play on their part.

Tenev expressed regret that Robinhood’s actions upset customers but said no hedge funds influenced its decision and the situation would have been “significantly worse” if it had not suspended buying. 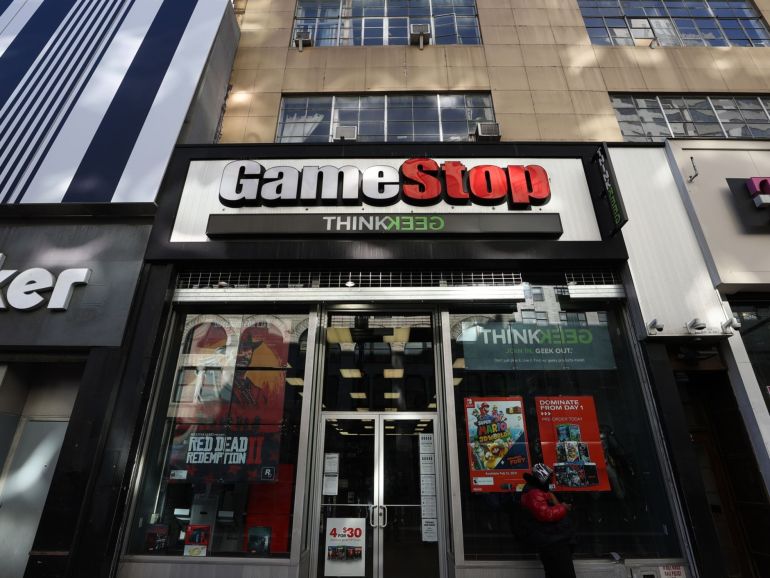 GameStop’s shares had a wild ride late last month [File: Tayfun Coskun/Anadolu Agency/Getty Images]
“I’m sorry for what happened. I apologise. I’m not going to say that Robinhood did everything perfect,” he said.

New York-based hedge fund Melvin Capital, which had bet GameStop’s shares would tumble, suffered huge losses as the stock soared leading up to January 28. Citadel had made a $2bn investment in Melvin on January 25.

Officials questioned Robinhood’s commercial arrangements with market makers as well as whether its “payment for order flow” model hurts customers.

Griffin, the majority owner of Citadel Securities, a Robinhood market maker, was castigated by Democratic Representative Brad Sherman for evading his question about whether market makers provide the same prices to all brokers.

Griffin maintained that Citadel Securities, which executes about 47 percent of all US-listed retail trading volume, had worked for years to help give consumers “a better price”.

All parties have denied any attempt by Citadel or Citadel Securities to influence Robinhood’s policies.

Gill and Huffman were asked about the role of social media platforms in potential market manipulation.

“We spend a lot of time at Reddit ensuring the authenticity of our platform … And in this specific case, we did not see any signs of manipulation,” Huffman told legislators.

At times, Gill and Plotkin offered their competing investment theses on GameStop, with Plotkin arguing that due to the rise of digital downloads, the video game bricks-and-mortar business model has “structural challenges.”

This entry was posted in News and tagged brokerage, financial, GameStop saga, news. Bookmark the permalink.